Ad blocker detected: Our website is made possible by displaying online advertisements to our visitors. Please consider supporting us by disabling your ad blocker on our website.
Enter our Megabass Big Gabot hollow body frog giveaway today!

I'm reviving my build thread from the dead because I've had a change of heart. After fishing/cruising with it in it's current design, I realize that it's 1) Way too light in the bow 2) very difficult to fish from/anchor without access to the bow 3) short on deck space when I bring the family & dogs.

So, I've decided to remove the bow cap... I know people don't like to see these old runabouts modified, and I'm not sure if I'll like the new setup, but I have good news. The cap on these boats is extremely easy to remove and does no permanent damage to the cap or the boat. I literally had the cap removed by myself in 10 minutes. 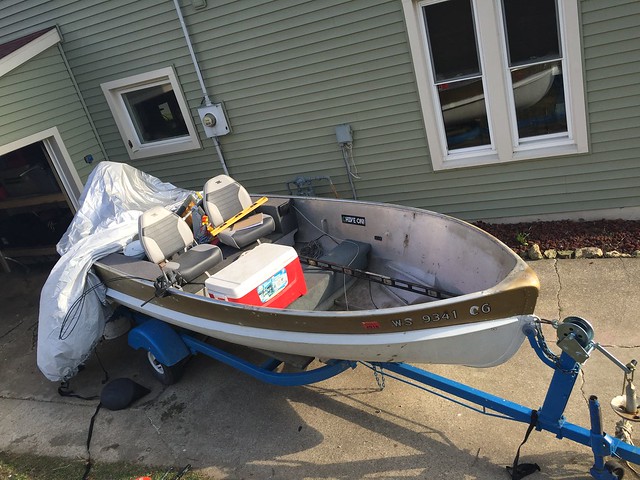 First impression: I can't believe how much room there is that was of no use to me before.

I have a layout in mind that I've been working on while getting paid to do other things in the office. Basically, I'm making it a side console and moving the drivers seat back one bench. I already have a seat there, so it's really just a matter of moving the controls. As a side bonus, my control cables were always too short to hide under the deck, so they have had to ride on top of the gunwale which is extremely annoying to me. With the new setup, I will be able to hide them completely since I'm moving the control box back about 3 feet. 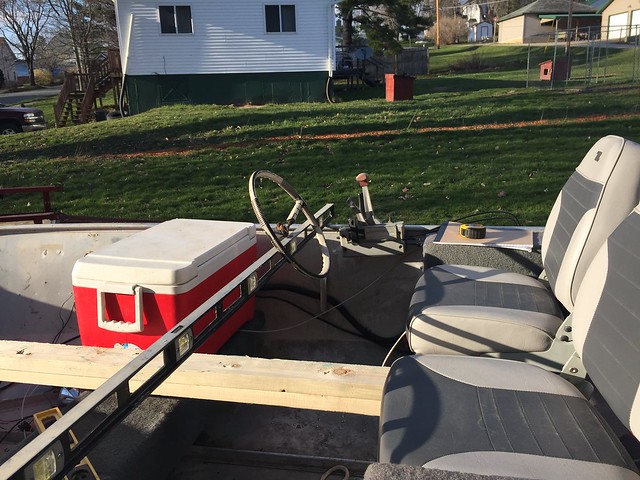 Here's a pic of my initial mock up of the design. Picture a console in there between the cooler and the wheel. This will give me a nice amount of space out front for a casting deck, my new trolling motor (Minn Kota Powerdrive V2 55# with I-Pilot), and my new RTIC cooler that I ordered. Of course, the cooler in the boat now is just a cheap, broken one I have but it's good enough for laying things out. This is the cooler that will go in that space and be recessed into the deck by 6": 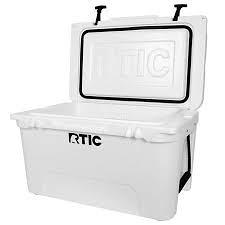 The deck will be 6" higher than the bench which will still leave some of the side walls exposed and keep the deck a bit lower for stability. I don't need or want a deck that's flush to the gunwales. The 2x4's in this pic roughly show where the deck height will be: 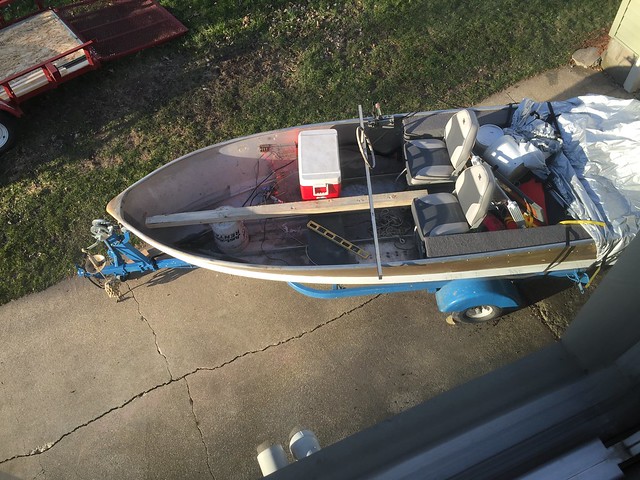 In the end I want to be able to have a nice pedestal seat in the front and also move some weight up under that front deck. I think with the new TM, two batteries, and anchors along with the decking should balance out my boat quite nicely.

I got a bunch of crap removed last night that was in the way and installed the first board across the bench to use as reference to build the rest of the framing. I'll keep you posted. Basically, I'm doing the same style as MassFisherman did on his Starcraft https://www.tinboats.net/forum/viewtopic ... 21&t=19040

At this point I'm looking at building my console myself out of wood unless someone has a cheap side console laying around. I don't want to pay what they're asking for one of the aluminum drop-in ones, although they look nice. So, if you have one that you think might work, PM me!
Marty

I was talking with my wife while out on 'Old Gold' this weekend and realized that I never brought closure to my build thread on here. It's come a long way and I can finally say that I'm done with this project. There may be a few things here and there that I'll work on, but that is the fun of boat ownership.

Work was intermittent because we were using the boat as much as possible, but it still needed all the final touches. 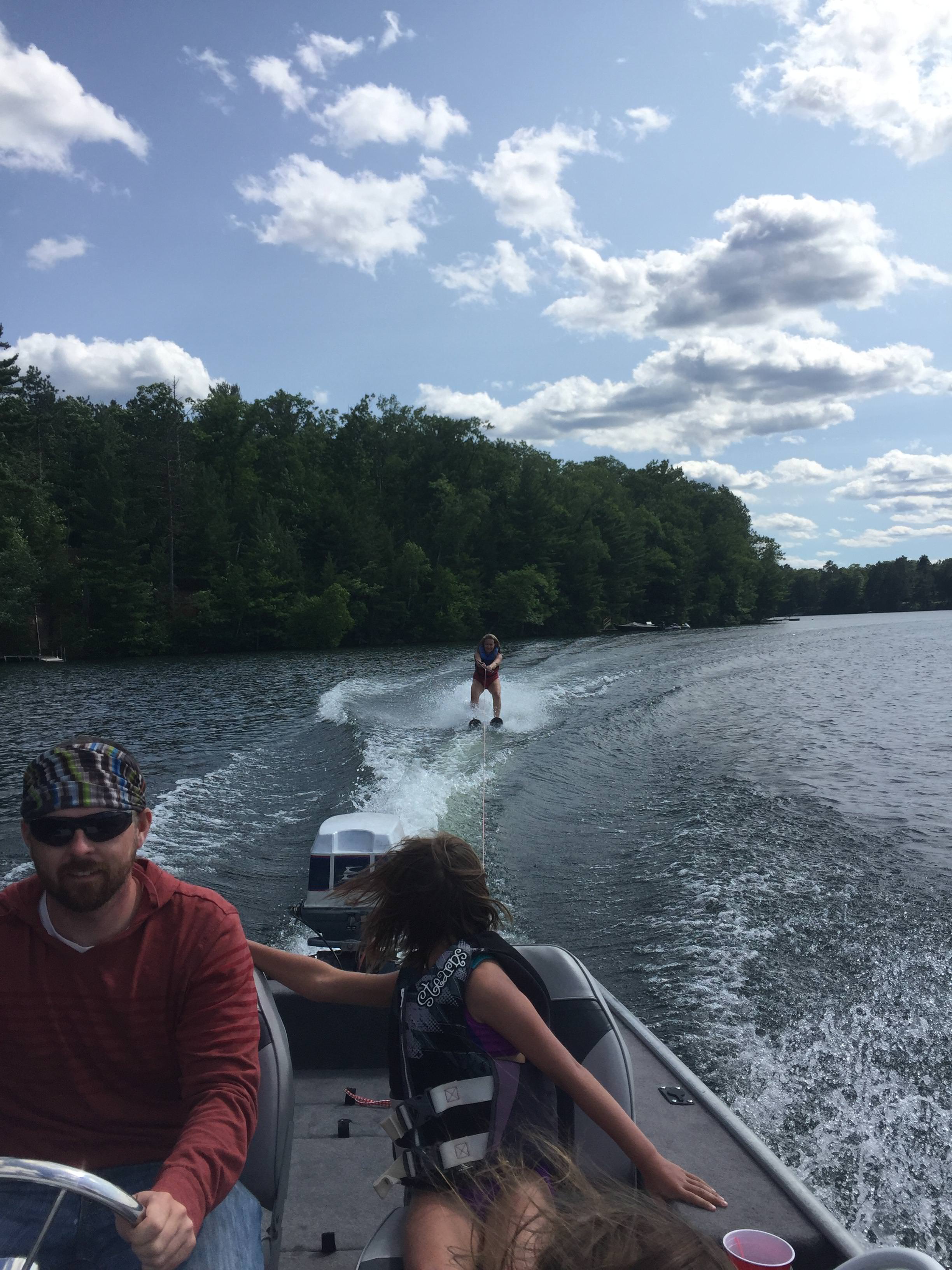 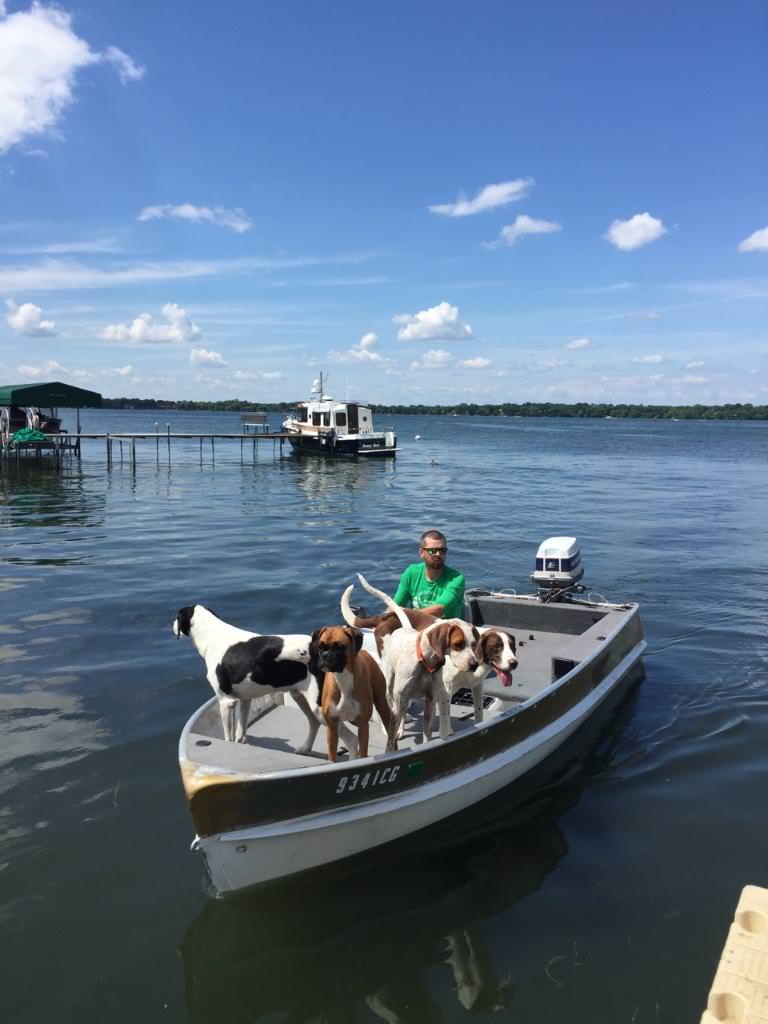 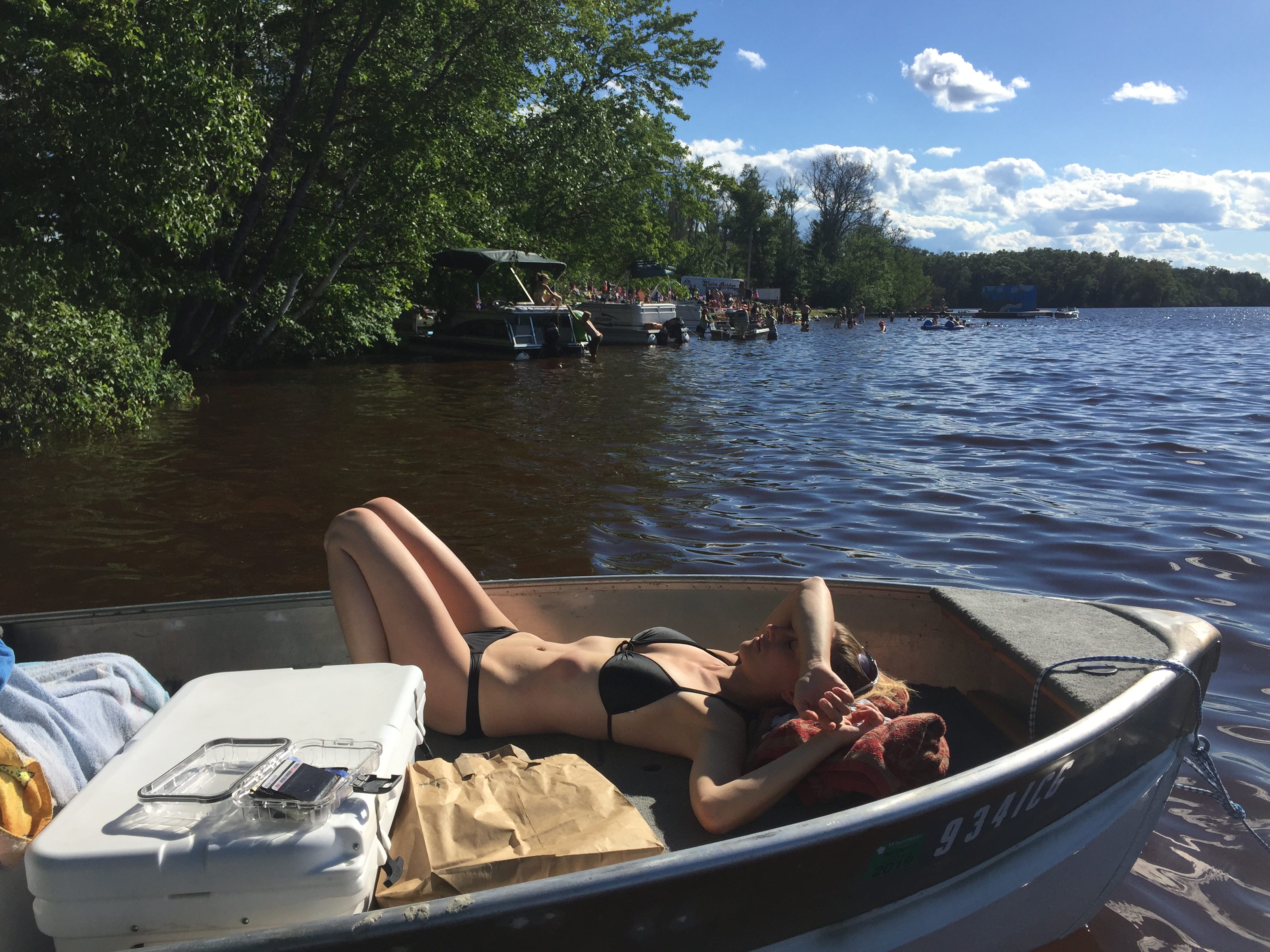 I built the front deck from 2x4's which was probably overkill but it's not that much weight despite how it looks in the pictures. I fitted a plastic tote, a milk crate and an RTIC cooler in the deck for storage as well as two seat mounts so you can put a pedestal seat on or a rear facing regular seat. 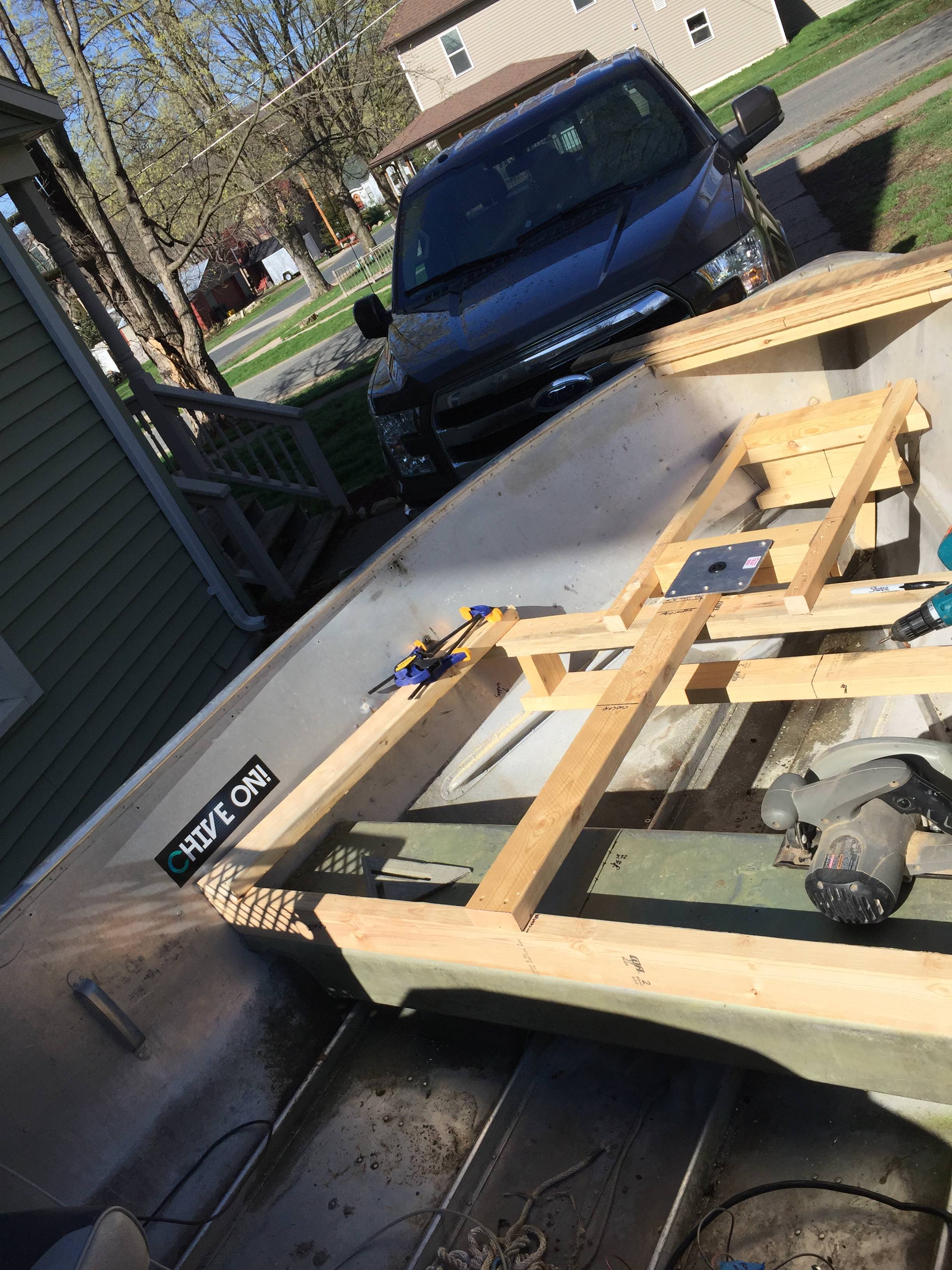 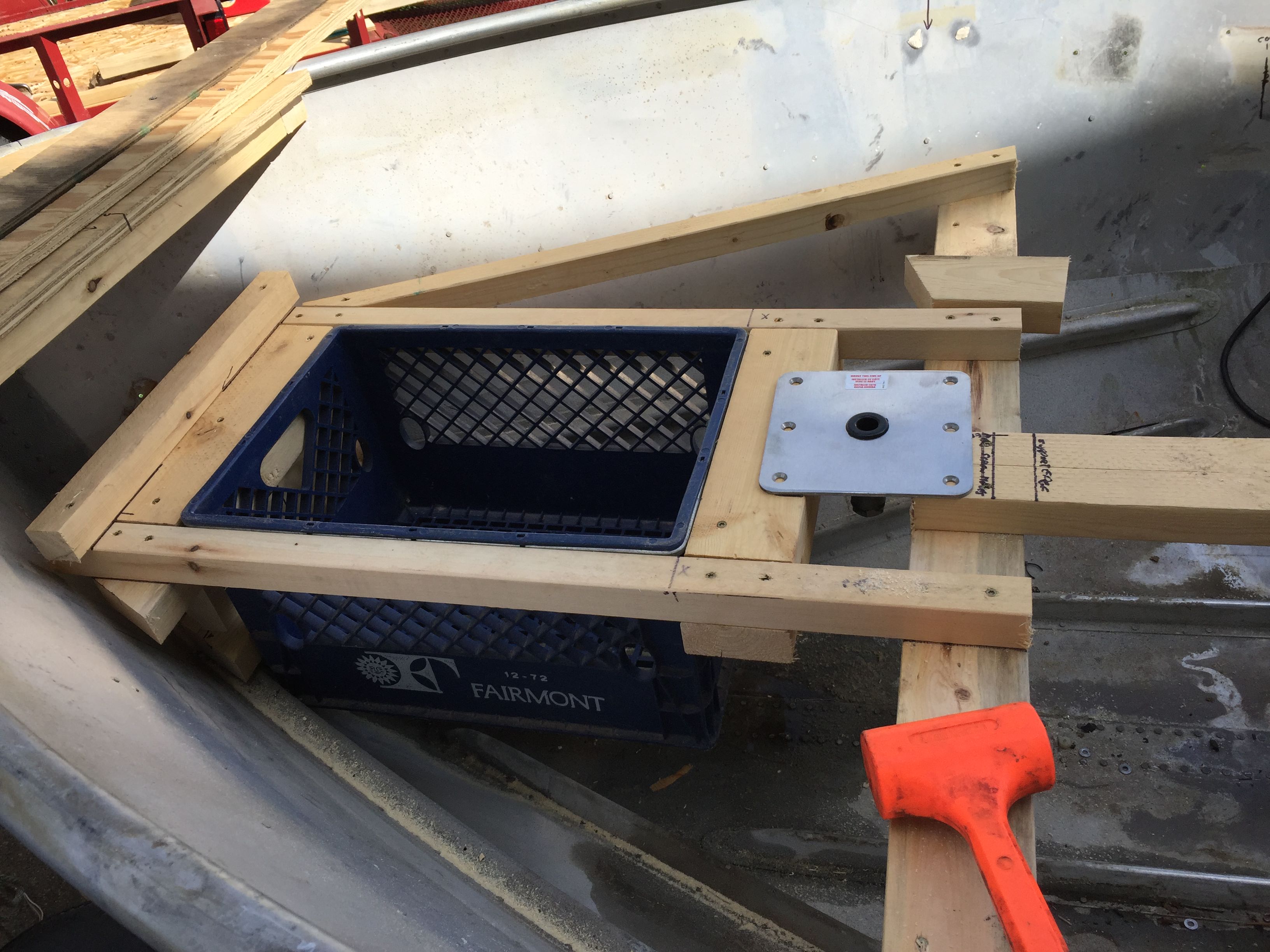 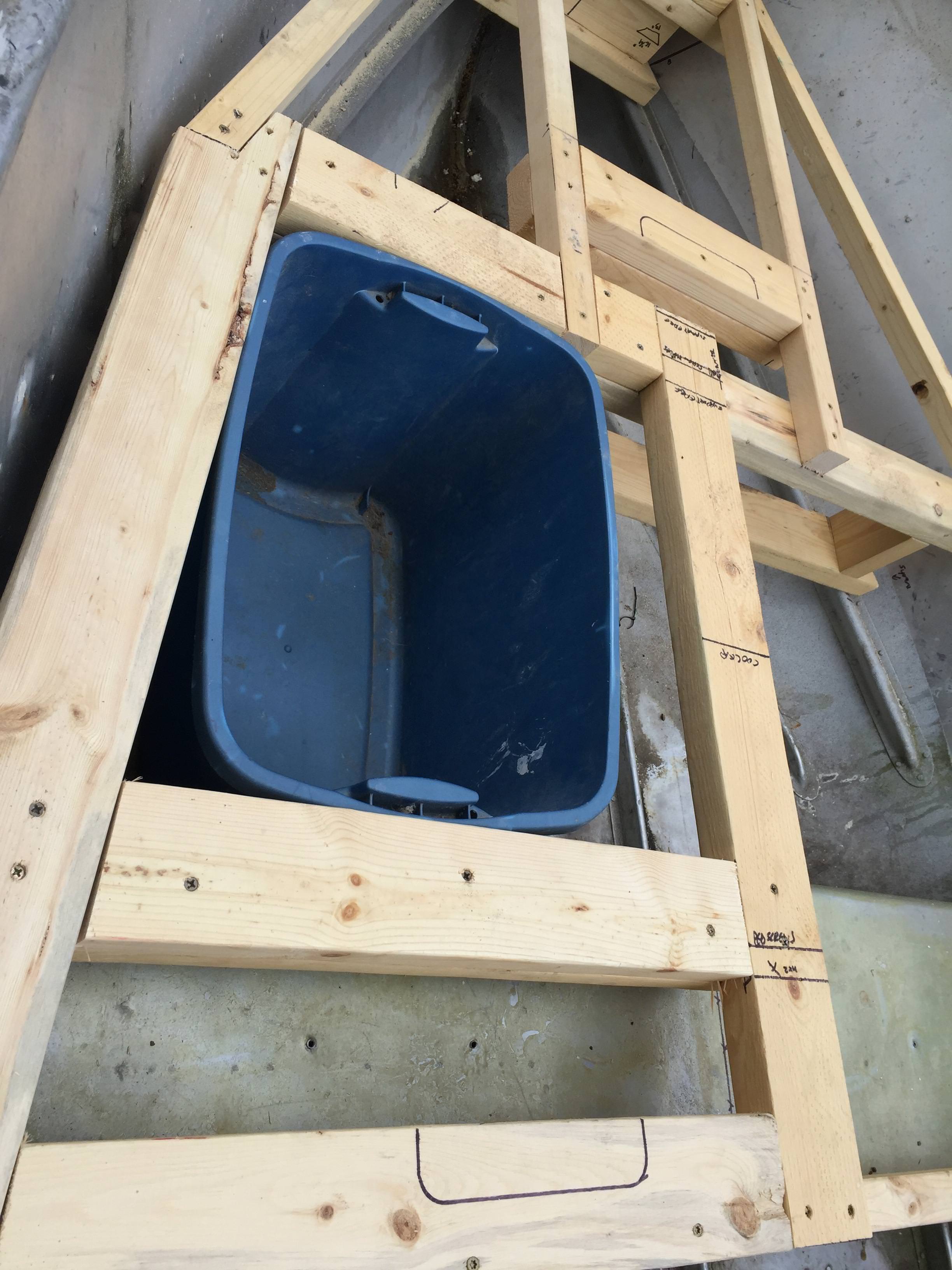 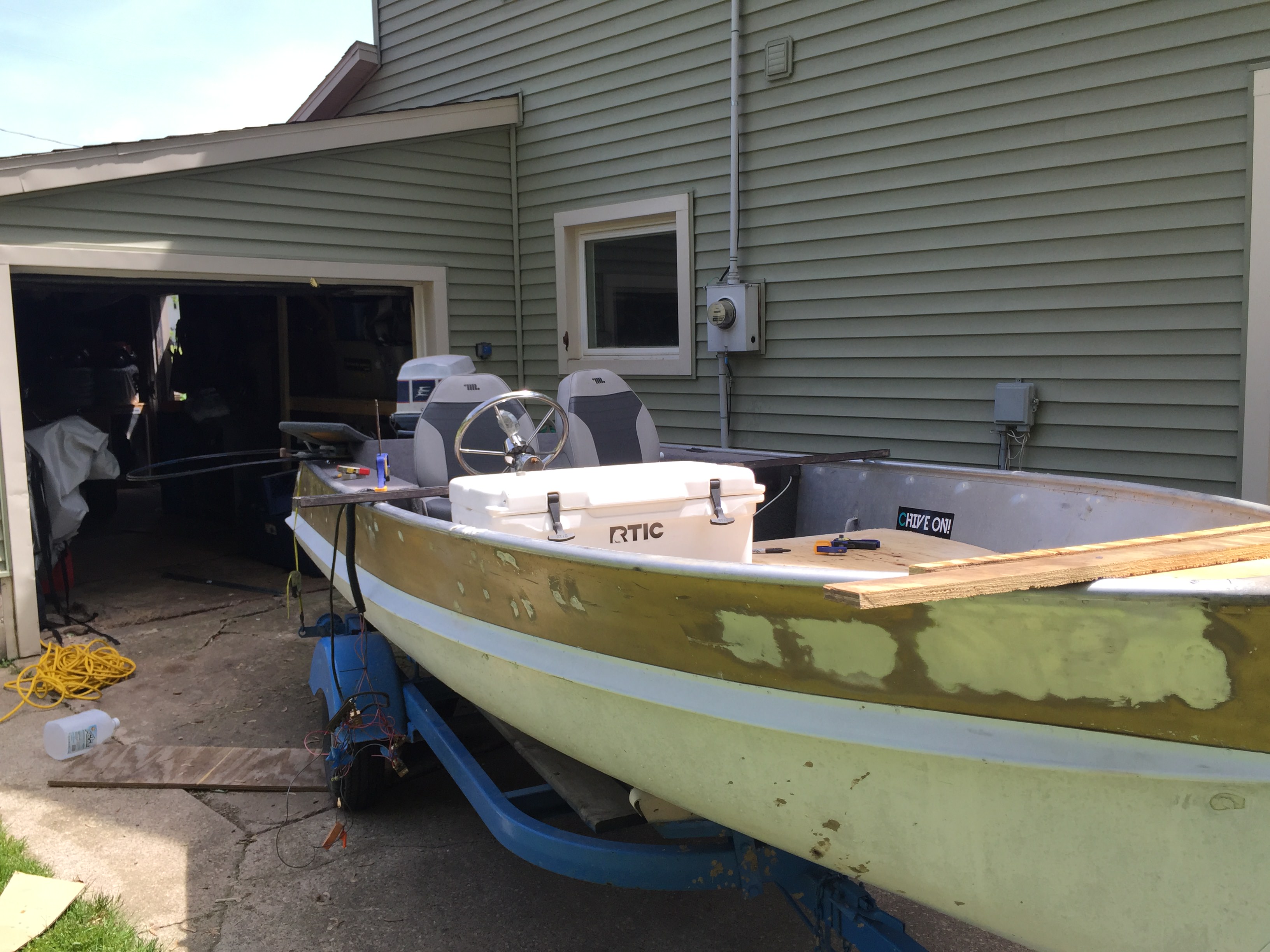 I built a side console out of plywood as well and mounted all my controls and electrical on it. Included in this was a stereo system with bluetooth, a new fuse panel, new switches, and some red LED lights for night time that are mounted under one of the original aluminum benches. 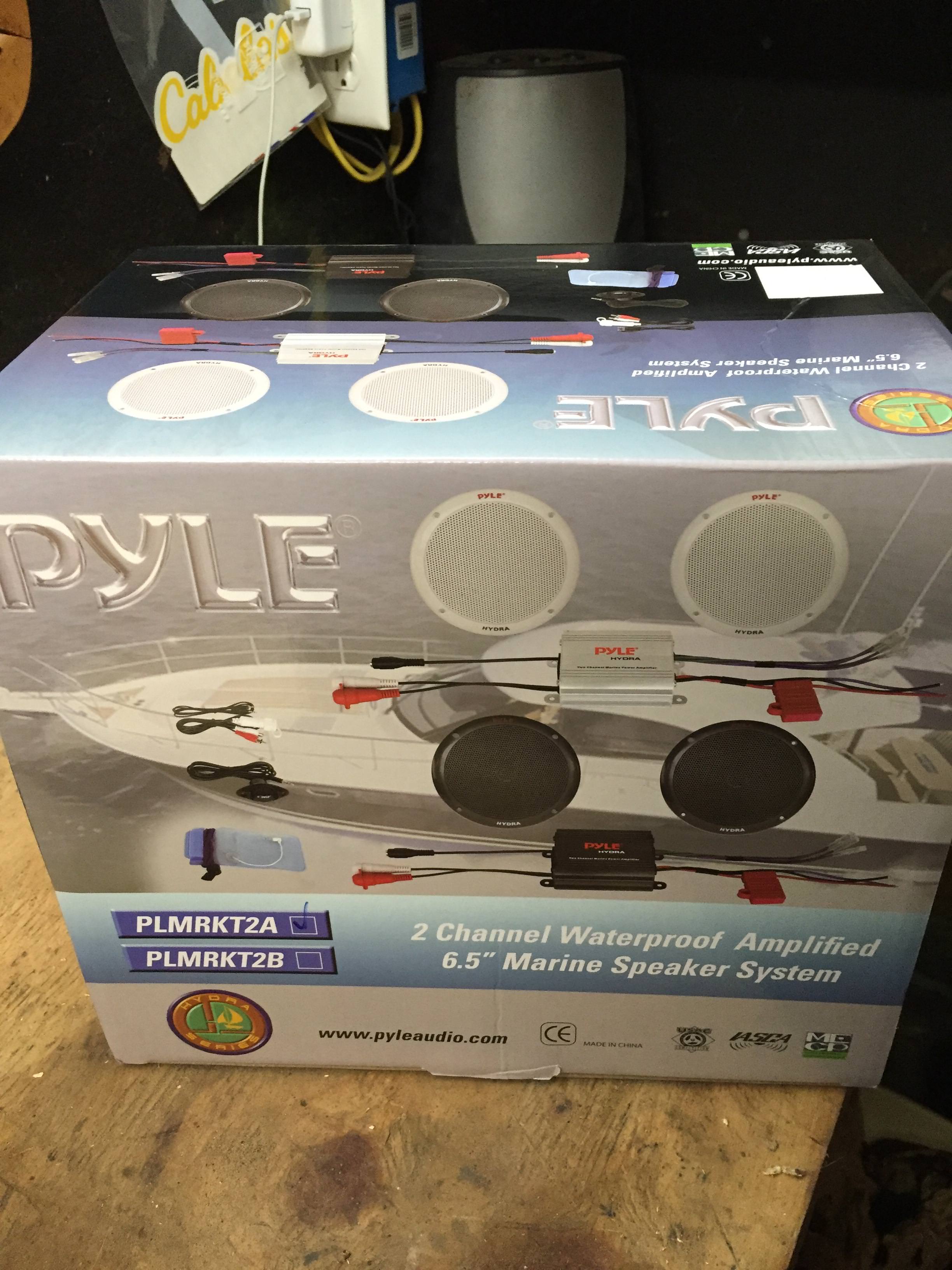 Then I carpeted it up and got to painting on the hull inside and out. Also I used a plastic cutting board to mount my speakers, a 12v plug and my trolling motor plug. The trolling motor is a Minnkota 12V that I added iPilot to for full GPS and remote functionality. 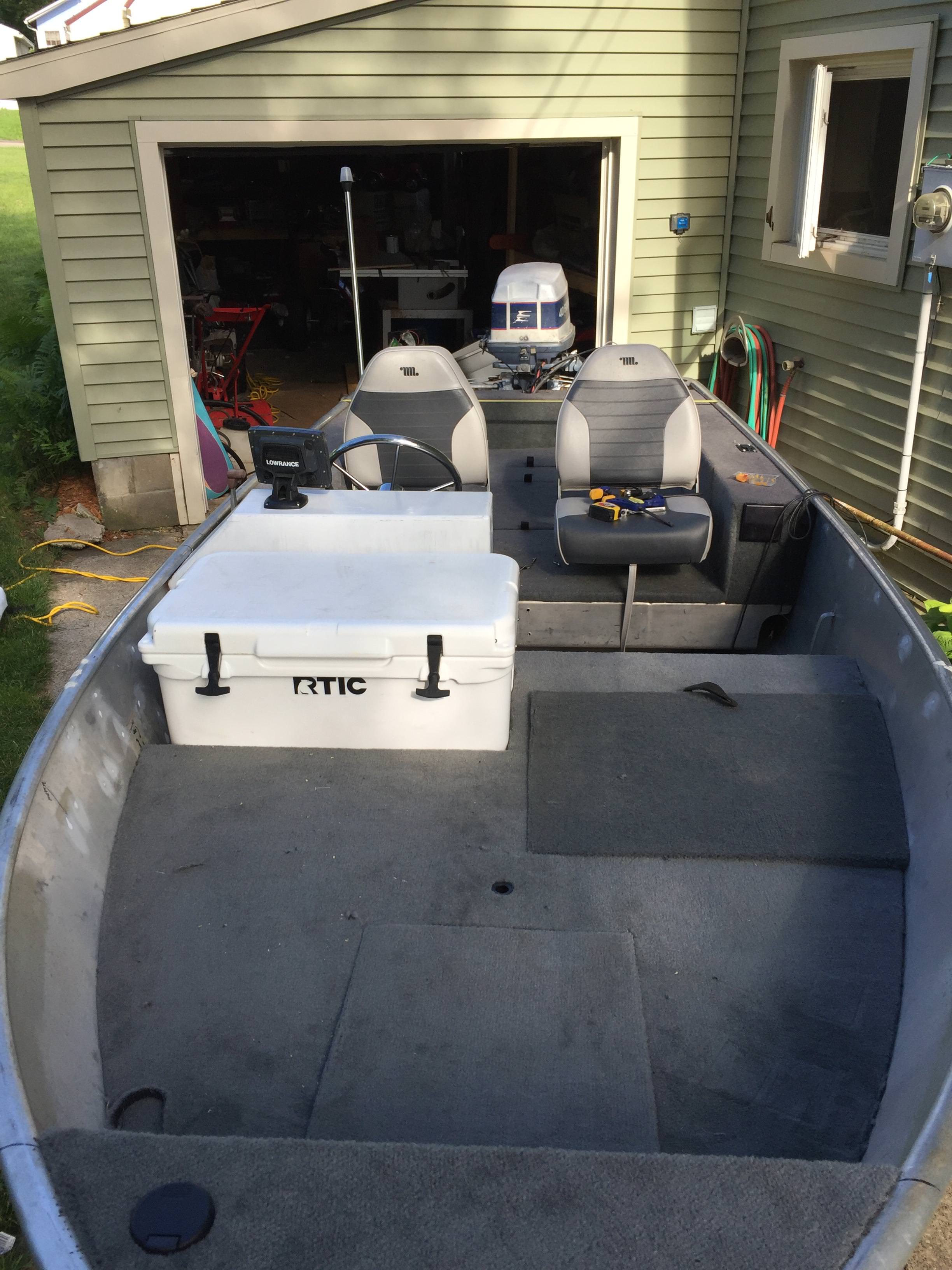 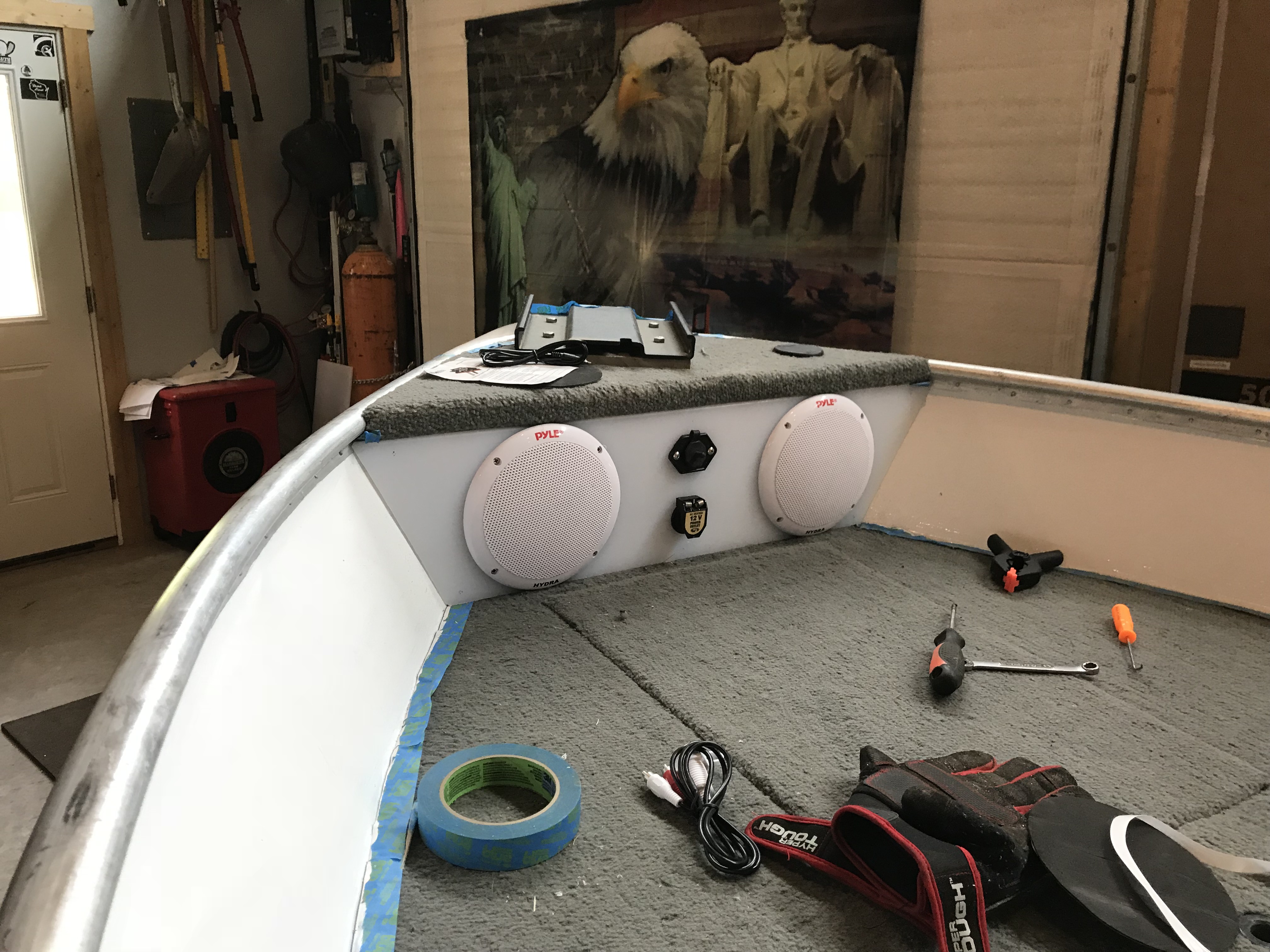 Finishing touches were the custom cut decals on the hull and some (near) replacement decals for the motor. 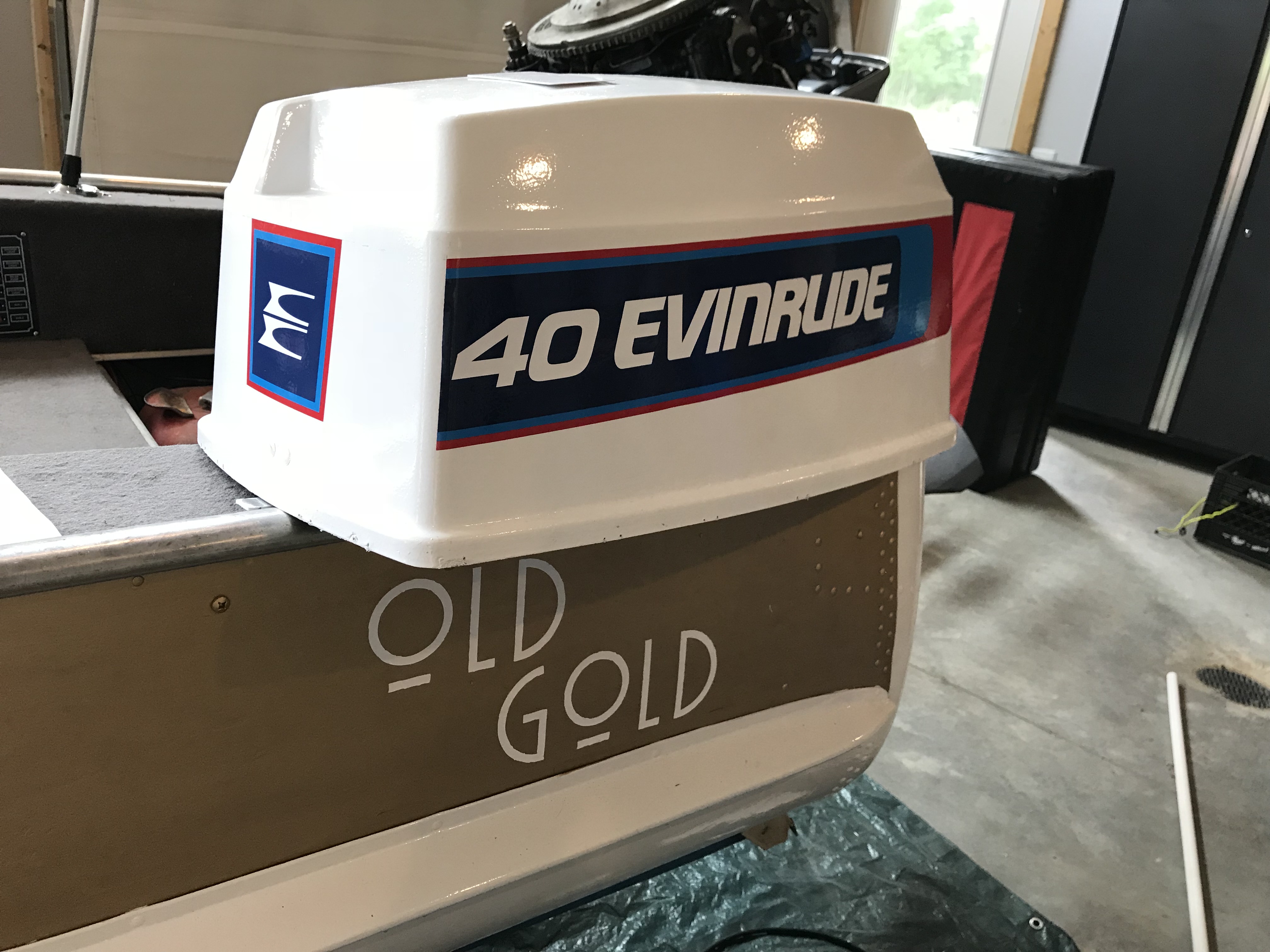 It's a great boat and I couldn't be happier with how it turned out. It would probably really rock with a 60hp on it, but I get great acceleration as it is and it tops out at about 23 mph when I'm in it by myself. 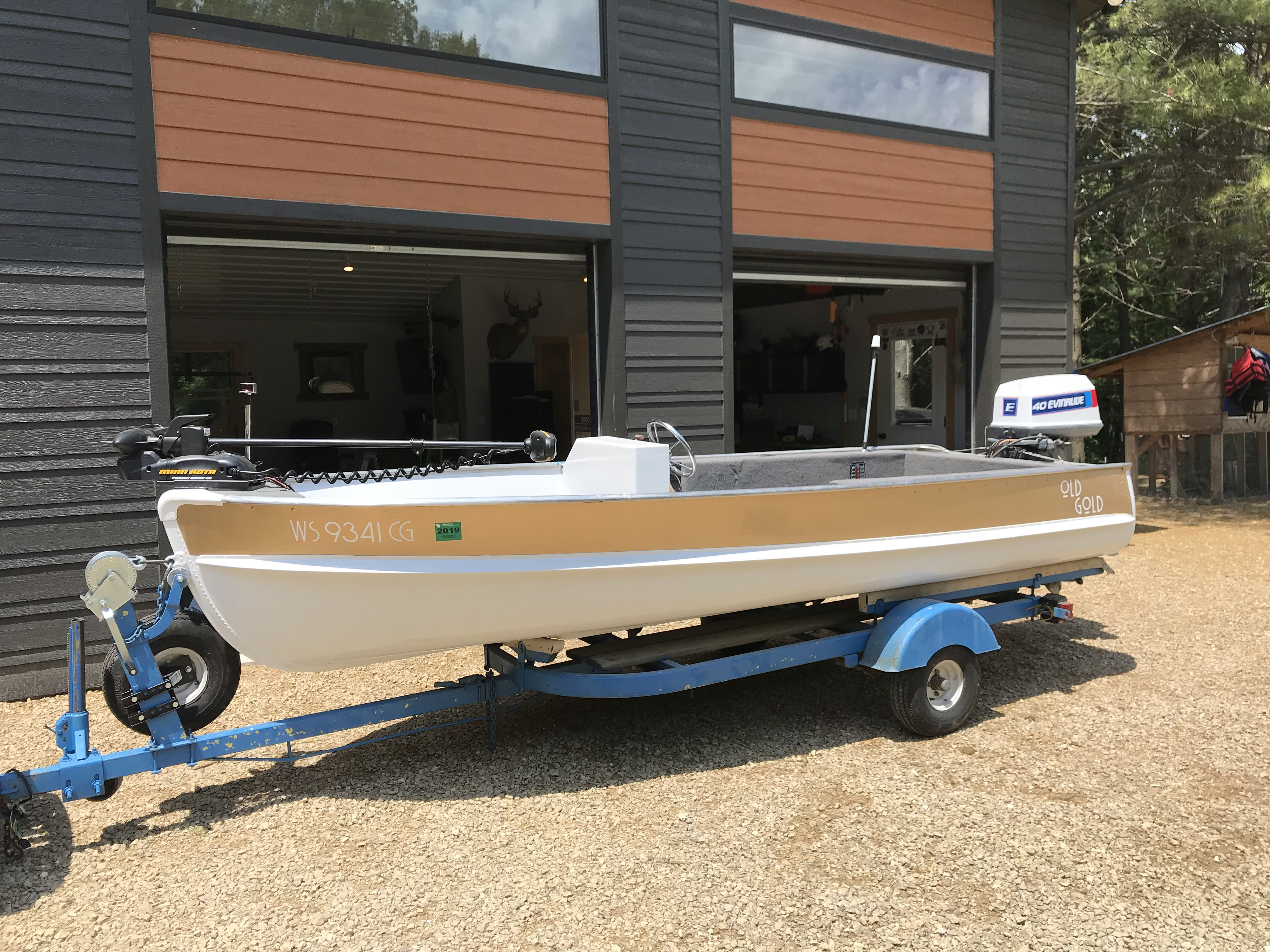 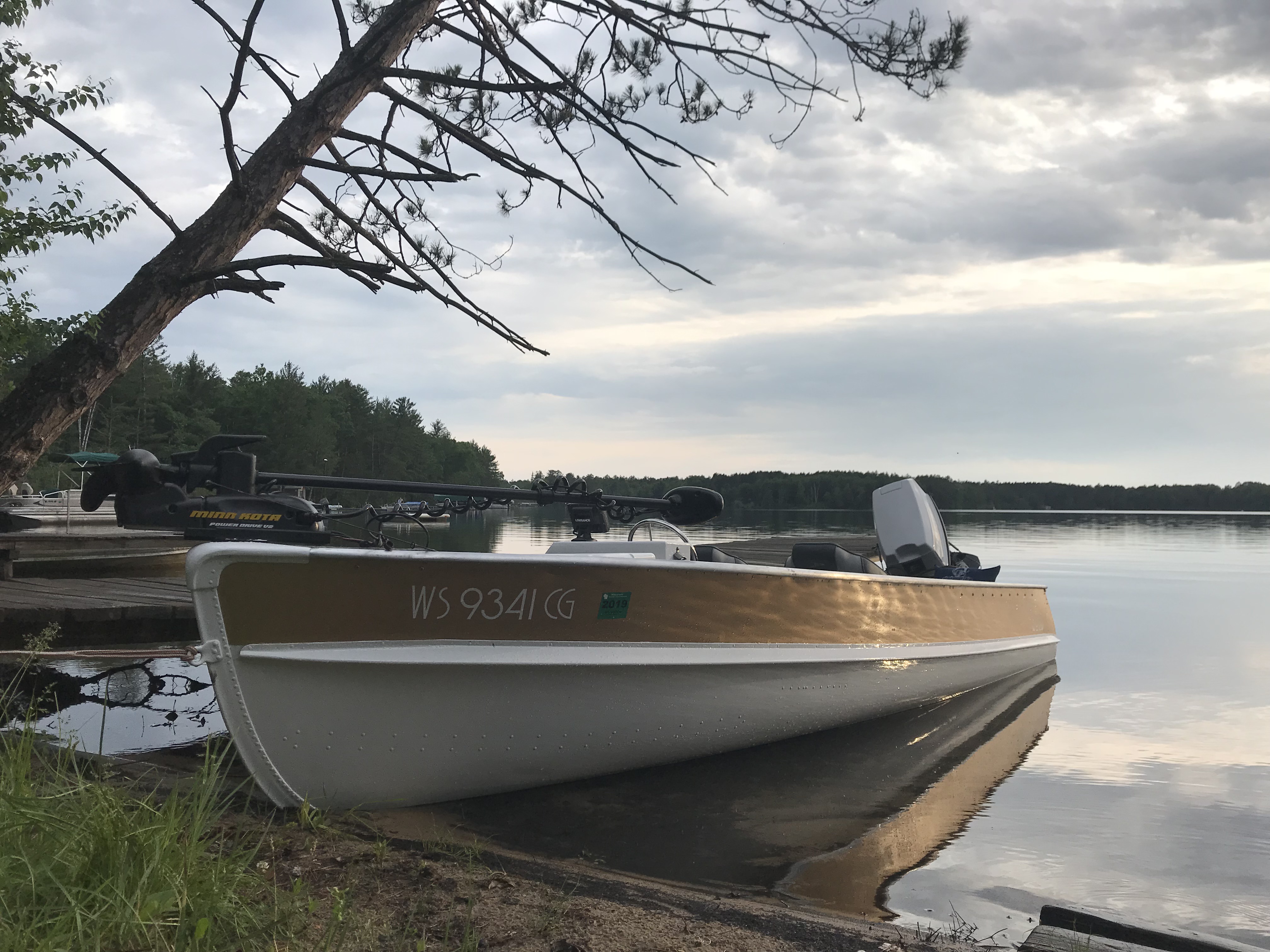 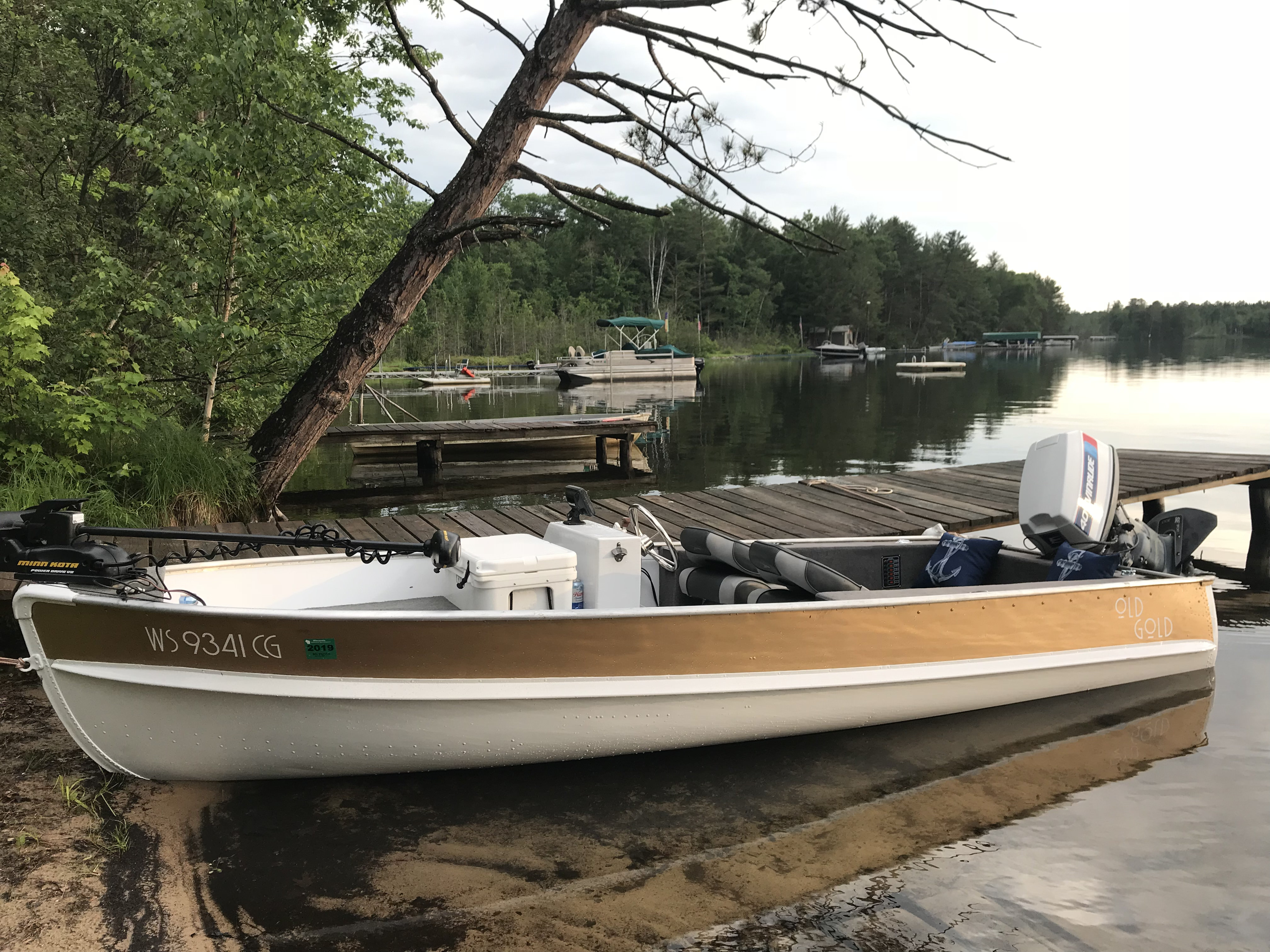 And here's the official before/after pics. Without knowing the details, it doesn't look that striking, but it was a lot of work! 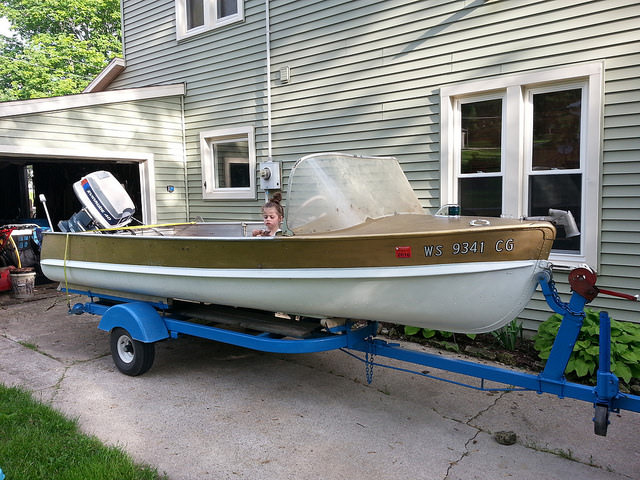 If you guys have any questions or want any more details, feel free to ask! Until then, I call this one finished.
Marty

Very nice looking boat. At first glance I thought that eagle was sitting on your bow cap.
Have Rod - Will Fish
Top

Looks great! I think everything came out nice from the paint to the new deck. Looks like you will be getting lots of good use out of it too

In the last picture it looks like the steering console magically moved to the left side of the boat. Has to be a camera angle or optical illusion kind of thing. Or, my eyes are playing tricks on me. Haha.
Have Rod - Will Fish
Top

LDUBS wrote:Has to be.......optical illusion kind of thing. Or, my eyes are playing tricks on me. Haha.

If you were in Alaska, you could get your eyes checked by an optical Aleutian ....
My Tinny is a tool, a means to an end, if you will.

LDUBS wrote:Has to be.......optical illusion kind of thing. Or, my eyes are playing tricks on me. Haha.

If you were in Alaska, you could get your eyes checked by an optical Aleutian ....

Return to “Jon and V boat Conversions and Modifications”