I'm looking to integrate a livewell into the center seat of my 14' Meyers laker, but I am running into an issue with the seat's overall width, only 11". I was planning on cutting out a void in the seat, removing some of the foam, creating the well with acrylic and use an access hatch to seal it. However the largest hatch I can find to fit the seat width will only have an opening of 20.5" x 7.5" resulting in about a 7 gallon live well. Is the opening and overall volume realistic to use as a livewell? Or do I need completely rethink the plan?
Top

I had to redesign my whole setup due to that problem too - I ended up cutting out a much larger section of the bench (in my case the rear) and putting a frame across the top of it to allow me to put a piece of decking over it with cutouts for the hatches because if I only worked with the opening sizes available in the hatches it wouldn't have amounted to anything in terms of the size of the livewell.

You could have a custom hatch made, but you're talking $200 +/-, though my 2 tempress hatches, the framing and the decking probably added up too. I also shifted the seat mounts forward in the process though, so it added some cost. Being that you're looking at doing this in your middle bench you'd only have one mount forward - but that whole cavity under the mounts I filled with foam, trying to replace some of what was removed to fit the livewell.

The other benefit to the framing design was the livewell was basically a rectangular box (including the enclosed top) with cutouts for the access hatches. The topside area between the livewell and the framing (other than the hatches) was filled with foam too - effectively insulating my whole livewell so it stays nice and cool in the summer with the water cycling.

I don't show the cutout, but it was pretty much within 1" of the front and rear edges of the seat top, enough to slip a 1/2" sheet of foam between the vertical face of the bench and the vertical face of the livewell and it spanned the entire width of the bottom of the boat (I made it rectangular and did not try to get extra volume by running it up the oblique sides of the bench). I cut out the foam so there is foam under the livewell in addition to alongside it in the tapered sides of the bench. You need ~2" of foam underneath the livewell to support it so you can have clearance at one end for a 90 degree drain fitting out the bottom.

If I remember I will get you a pic tonight of how I ran the plumbing, all of it is in the rear corner of the boat with a thru-hull fitting set in the transom. Be sure when you mount your aerator pump to the transom you set it so the hose fitting coming out of the pump points straight up. I didn't do this and I end up with an air bubble trapped in the pump that needs to be released or the pump won't function efficiently. 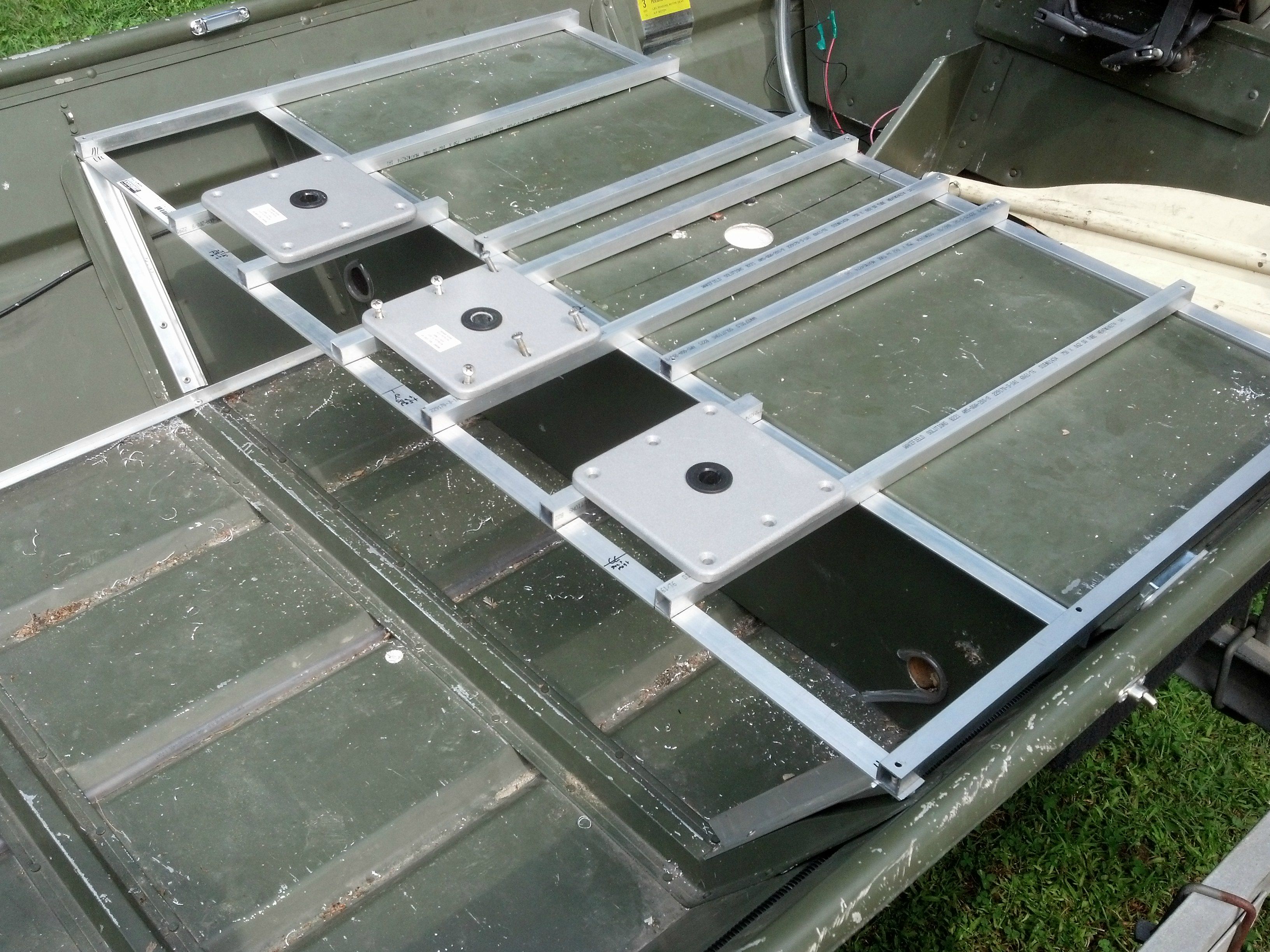 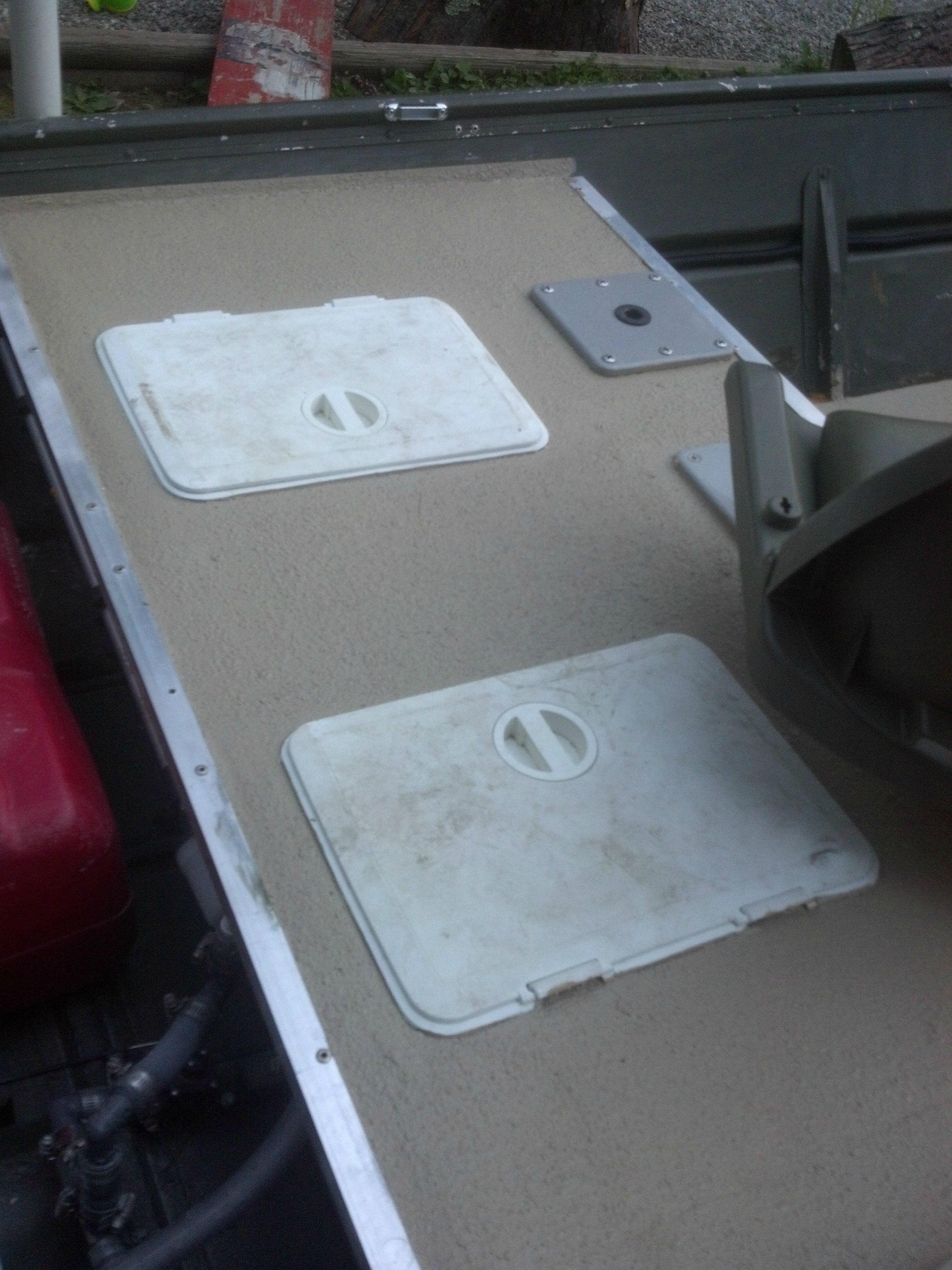 This shows the connections into the livewell from the transom side of the rear bench. The overflow out the top joins with the drain line with the fill valve at the bottom to go out the drain in the transom, and the fill is off to the right mounted ever so slightly lower in the livewell than the overflow drain. 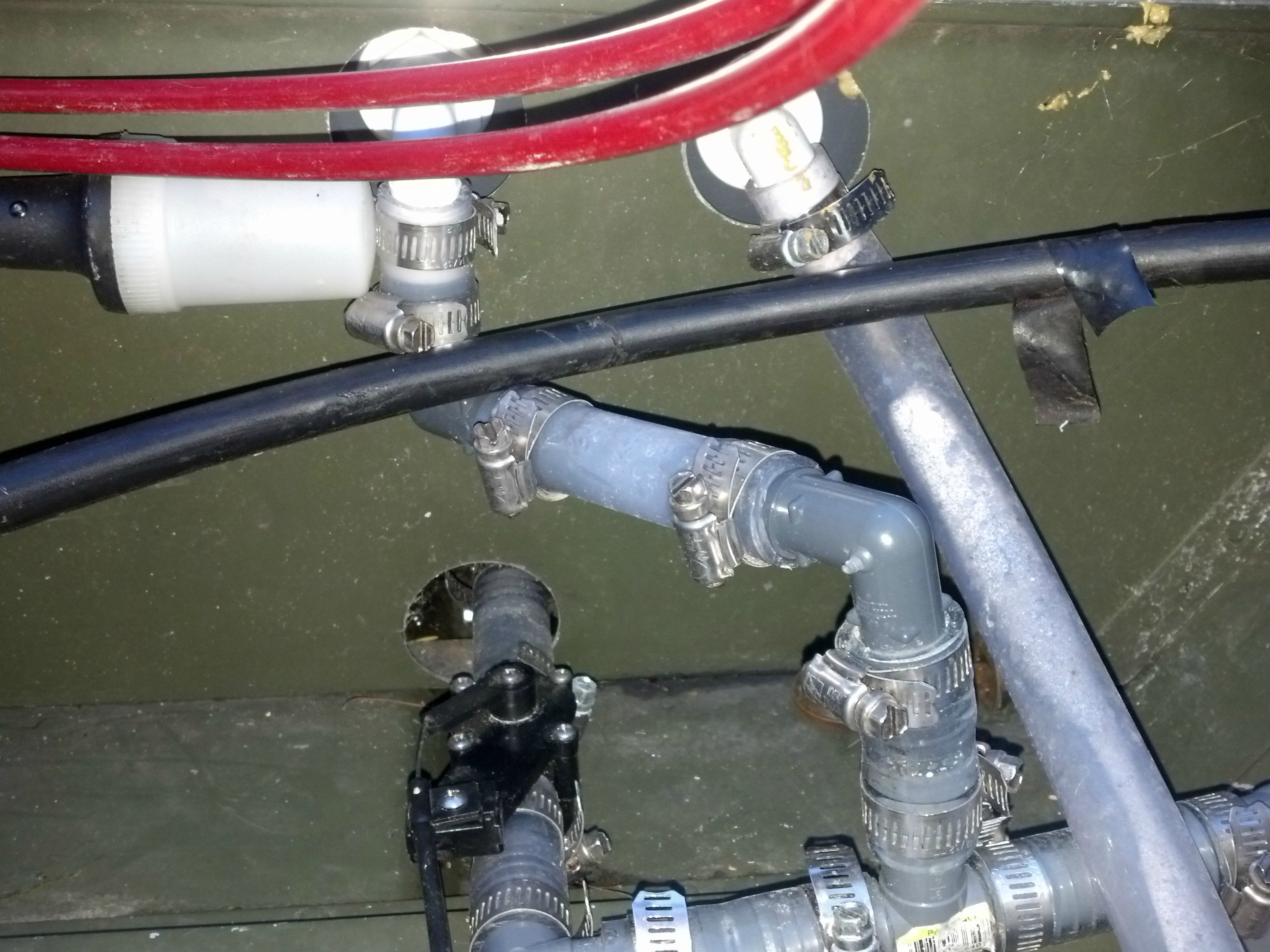 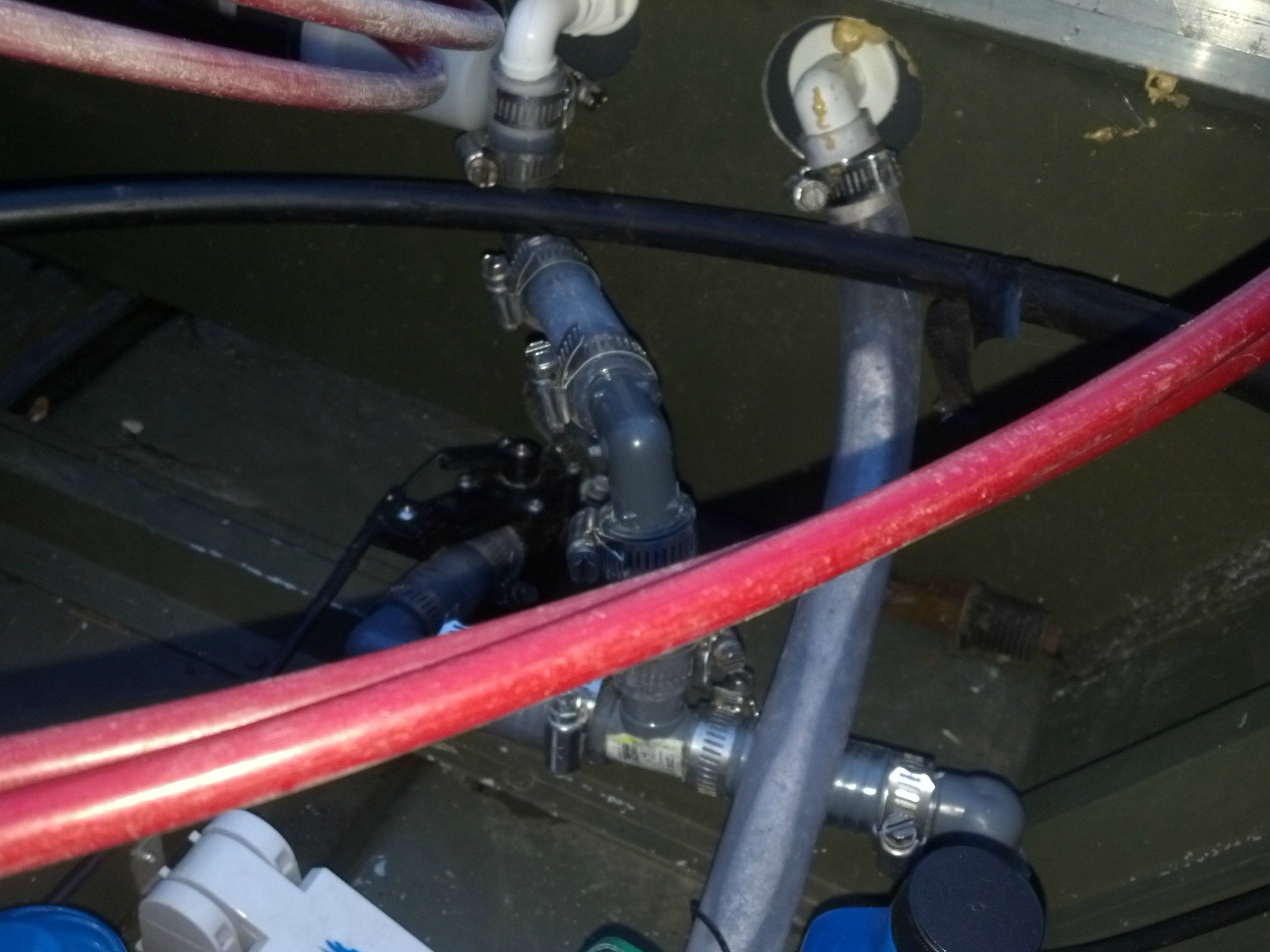 It's a bit cluttered back there with all the wiring for the fish finder thru-hull sensor, bilge, livewell and rear post light and the oversized steering and throttle/shift cables snaking around, but this shot shows how I routed the output from the livewell fill pump (white/red tsunami pump on the transom) horizontally in error - see how it runs parallel to the line of the transom rather than straight up from the floor - Don't do that! 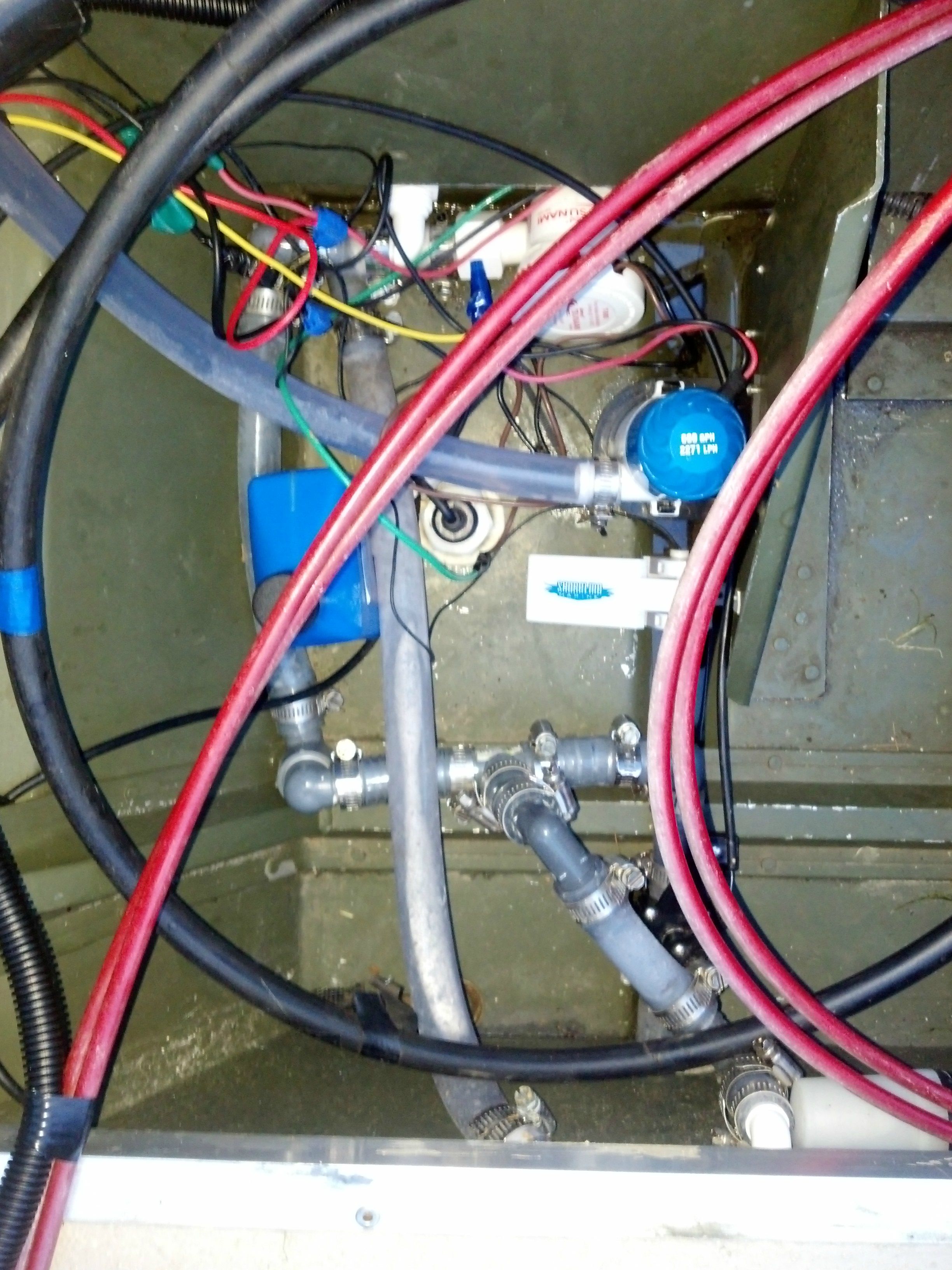