Ad blocker detected: Our website is made possible by displaying online advertisements to our visitors. Please consider supporting us by disabling your ad blocker on our website.
Enter our Megabass Big Gabot hollow body frog giveaway today!

And it's still going.

Some winter I'm actually going to put carpet in it. This winter it sat outside in the garden plot with my cover on waiting patiently and it's still waiting...

I did pop the cover last week and everything is dry and looks / smells good. Motor turned over by hand too so it's just a waiting game for the water to warm up.
My Seadoo Powered Bass Boat https://www.tinboats.net/forum/viewtopic.php?f=21&t=8385

Getting closer to water time again. Took a trim in my truck to get the stickers for the boat. I forgot to mail them in 'again' and thought I might actually get on the water this week. And then it rained again... 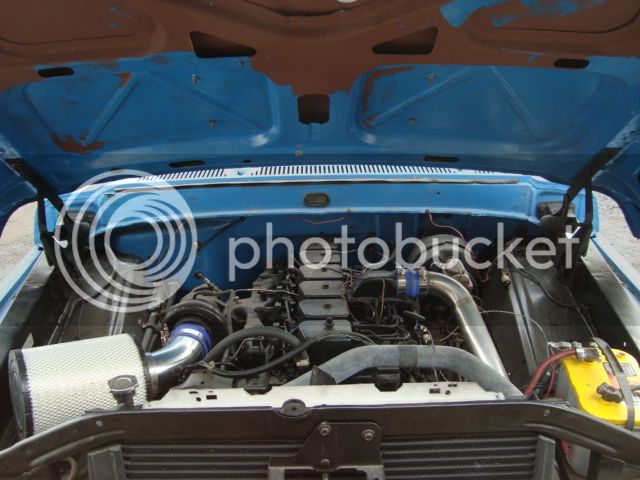 oh. the way you worded it i thought you bought it. i had the feeling you wouldnt have bought it unless it was a good deal. anything with a cummins is demanding top dollar last few years, im sure you are aware

my dad had a '68 contractor special with a 3 on the tree and a 352 until i was about 15. it was beat to [Censored] and when he traded it in they gave him $50. as we were waiting for the new truck to be detailed a flatbed loaded her up

i was nearly born in that truck but my dad had no trouble letting it go lol.
Lowe 1648M | 25 hp Johnson electric start | Minnkota 40AT
always in progress.
Top

So here we are, ready for another season. Finally managed to get all the planets aligned and got the boat in the water for the first time this year. Boat fired up fine in the garage, a bit smokey and rough at first but it smoothed out after a minute or two of fast idling.

I did get new decals for it and painted the engine cover and some other bits with the plastic paint. So far I'm really happy with how it has lasted but with the texture it does get dirty quickly. Cruised up to the islands and picked up a bunch of 13" class smallies out of the eddies. Saw a bald eagle, a beaver and a deer. The boat was sluggish going up river, figured I sucked up some trash at the ramp because I left it idle for a while to make sure the cooling loops were open. Coming back down, it was back to it's normal smooth and fast.
My Seadoo Powered Bass Boat https://www.tinboats.net/forum/viewtopic.php?f=21&t=8385

I'm starting to feel bad, I thought a multi colored jet jon was the way to go around here.

Are you using a product simular to plastidip? I have been kicking around the idea for parts of my boat.
Top

Mine is multicolored too. Everything close to the water is camo'd, blues, brown, green, black, reds ghosted over with tan so it doesn't scare the fish away.

Glad to hear you made it on the water.

Oh man, what a fun evening.

For most of this season and part of last season the boat just didn't seem to perform like it should. My fooling around video showed some of the problems with cavitation on launch that's been getting worse as time went on. This afternoon after welding holes in BigTerps jet boat I really looked over my pump and found that the bellows for the drive shaft ceramic seal was stiff and the seal was not seating very stiffly. I know that's a common place to ingest air into the pump cavity. So, loosened the hose clamp and scootched bellows a bit tighter against the seal ring.

Kid passed on going fishing to go buy boots so I was solo on the river. The boat was alive with power and really loaded the pump instantly launching the boat out of the water like it used to before I added the pods. Before it would hesitate and cavitate launching slowly in a very flat attitude. Speedo showed mid 30's at 4k and a max of 45 which I hadn't seen in a while. So either the kid is overloading the hull or I had a problem...

I did get to fish a good bit, caught a 18" channel cat on my fire tiger rapala and a ton of oddball bass on it or my black jitterbug at dusk. As usual, the mayflies were out in force and without a bug catcher sitting up front I was forced to wear my sun glasses coming down river. I'm sure the bow is speckled because my glasses sure are.

So, since the enthusiasm is back I'm going to try and get another video up of it running and maybe the launch and recovery sequence.
My Seadoo Powered Bass Boat https://www.tinboats.net/forum/viewtopic.php?f=21&t=8385

I love that boat and gathered a lot from your build.
~Mac~
Top

This was an awesome project I've been looking at for a while. Really motivated me to build something of my own. I started with a 1648 tracker and a Kawasaki 1100. Its been alot of fun and I'm just about finished. But have some thoughts for hull protection, your in a similar area/river as myself, what do you do to protect your hull from occasional rock abrasions? I am considering a bed liner product with a smooth application. What are your thoughts?
NewRiverDan1
Top

Excellent build! I have a 1448 and 580 motor I'm about to pair together. Mine doesn't have the variable trim and trying to figure out how to mount the jet. Do you know about what angle in relation to the bottom of the hull gives you the best performance? Can't wait to get cutting on mine and will be utilizing much of your designs. Thank you for the write up!
Top

Can't thank you enough for putting this build up. I'm currently working on one myself and this helps alot. Was wondering if there was any chance I could get you to mill the rear plate that holds the jet? How much to run the part? I have everything I could need to build my jet Jon except for that cnc mill of course.

Hey guys, sorry I haven't been paying attention to this thread. NewRiverDan1, per the bottom protection, I just try to avoid the hard stuff on the bottom. I really want to put steel flex on the outer hull some winter and see how that does.

JasonD for the pump mounting plate, 90` to the bottom of the hull and high enough that you can maintain no drive line misalignment. On mine the bottom of the pump was @ 1/4" above the bottom of the hull. For fabbing the plate, I could do it but you'd need to supply the 3/4" aluminum plate. Per the trim, I think you can add the trim nozzle setup to a non trimmed pump 140mm pump without issue. You should do some research onto that.
My Seadoo Powered Bass Boat https://www.tinboats.net/forum/viewtopic.php?f=21&t=8385