Talk about the kill here or anything weapon related.
15 posts • Page 1 of 1

My friends and I setup a 12' canvas wall-tent in the deep woods of Vermont and then ferried the supplies in by toboggan for a week+ long muzzleloading deer hunt. We setup as traditional camp as we can, less items for safety, so wood stove, candles, getting water from the stream (less drinking water to be safe), etc.

We also all hunt using replicas of original flintlocks dating from the 1770s to 1805 for the 'oldest' design. In the 4-days I was there, it rained 2 out of the 4 days. Wearing 100% wool products kept us warm & dry throughout the rain and keeping my lock assy tucked up under my armpit kept it out of the elements. When in the areas of buck only, we saw does after does. In the area where I could take a doe, I walked up within 40-yards of a mature cow moose. Pretty cool, a big'un girl she was!

Sounds like fun, I enjoy hunting with a flintlock and even manage to get a deer with it every once in awhile!
Top

Old ways are the best ways.
In Wyoming, the Game and Fish Dept used to pass out depradation hunt tags for whitetails getting into people's hay. It was muzzleloader only either sex and cost $5. The Dec hunts in Wyo are cold so we usually just went for the day. To be out there in the dark in Dec was amazing. Coyotes, fox and badgers all over the place. Mink in the streams. I spooked a whole herd of mule deer and was surrounded by them. The snow was about 25-30 inches deep in the stream bottoms. I walked up on several does at 20 yards. They both were standing broadside. I could count their eyelashes in the morning sun. I did not shoot them.

Later I jumped the biggest whitetail buck I have ever seen out of bed. He had at least a 25-26 inch spread, maybe closer to 30. All I had was a butt shot on a running buck with a single shot muzzleloader. I followed him in the snow expecting to get a better shot. I followed his tracks for 2 hours. Then I came back the next weekend and followed him again. I never fired a shot, but it was one of my most successful hunts.
Top

ppine wrote:I never fired a shot, but it was one of my most successful hunts.

I hear you there, it really is 'quality' time spent in the woods! Glad to see others share my sentiment

Yep, just like quality time on the water. It isn't always about how many or how big.
Have Rod - Will Fish
Top

I used to meet up with my Dad and 2 brothers every fall to go hunting. We have lived in different states. It used to be easy to get out of state tags so we hunted all over the place. Now we are older and Dad is 94. I still have strong emotions camping in the old wall tent that went on every one of those trips. I lived in the tent once for a month running a tree planting crew. Every time it snowed I had a lot of company. We called it the Flagstaff Hilton.

I lived in CO and WY back in the 80s and used to hang around with lots of buckskinners. Someone always had a new lodge, or a bunch of skins to tan or was making cooperage. It was fun and taught me a lot. They are very serious in the Rockies about the Fur Trade Era. The buckskinners I have met in Nevada and California are fake in comparison and it is not the same. The old ways are the best ways.
Top

I spent many hours in the stands and luck would have it I took this old buck from the backyard during the rut. It's all about the journey and rarely works out just like you planned! 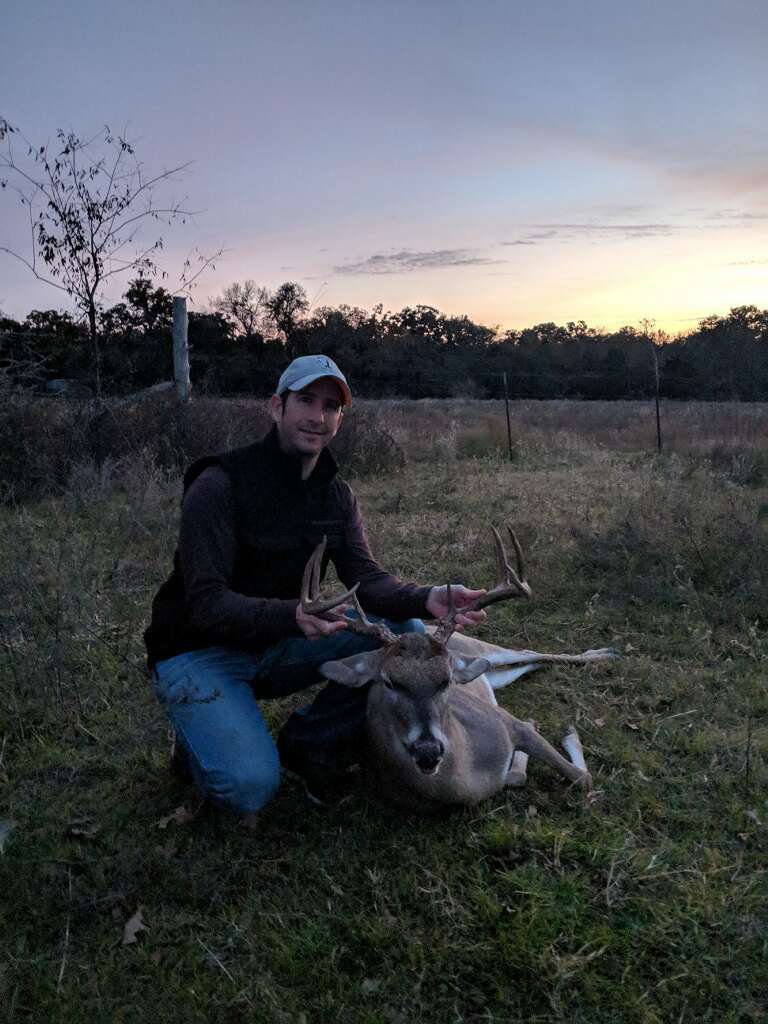 Went back to our tent camp this week for some rabbit hunting, using flintlock smoothbore fowlers ...

For all you buckskinners out there, may I recommend reading "The Big Sky" by AB Guthrie, Jr.
I am just about to finish reading it. Shining times in the Mountains at the end of the Fur Trade Era. Pulitzer Prize winning writing.
I sleep like a baby after reading it each night.
Top

overboard wrote:Sounds like fun, I enjoy hunting with a flintlock and even manage to get a deer with it every once in awhile!

Here's one from this year!
I was still hunting and came upon a small pine snapped off at about shirt pocket height, it was rubbed and there was another rub next to it, thought to myself, that looks like a decent racked buck snapped that pine. Took about 3 steps and there stands a buck off to my right looking at me, brought the gun up, just got the sights on him and was ready to squeeze off when he decided to vacate into thick stuff before I even got a shot. Went about 5 or 6 steps further and I was at a place I could see through open woods and a shallow swale leading into a big hollow, looked like a good place to stand for awhile so I found a spot and went on stand. About 5-10min later I see a couple of doe and a buck coming up through the woods off to my left, the one doe stops broadside for a perfect shot, I shoot, miss, and she is standing there looking at me!

I start the procedure of reloading, and while I'm at it my buddy comes up from below me, we start talking and he says, don't move, there's a deer standing down there, he shoots and misses, now we're both reloading!

SO, we both get reloaded and he goes down to check where he shot, and I went over to check where I had shot, look over and there stands another doe, just got the sights on her and she starts running, WTH the guns been fired so I took a running shot at her, missed and back to reloading!
At another place I put out 2 buck for him, one was standing, he fired, and the gun didn't go off! Last year he forgot to take the frizzen protector off when he fired, and had the flint fall out when he cocked the gun on another deer!

Couple days left in the season and my buddy makes a short drive for me, here comes a deer, it stops and is looking at me, the sights are on it, pull the trigger, smoke clears, and miracles do happen, I got it! Of course it had to be a buck that already lost its horns, GEEZ!
I'm iffy with a FL, my buddy used to be deadly with one, a back operation, medication, age, are all taking a toll on him.
Why the heck do we even hunt with them, it's fun!
BTW, I have only ever lost 1 deer I hit with a FL, seems that I either miss cleanly or get the deer. When we had to use round balls in PA I shot one at exactly the same place I would with a rifle, just behind the shoulder. I knocked that deer down immediately, but until I got reloaded it got up, got out of sight, and we lost the blood trail and never got it, lesson learned, aim for the front shoulder with a round ball when they're broadside.
OK, enough of the hunting story!