I am trying to acquire a 15 ft riveted Jon boat that has 2 seat, front and rear, and a livewell/seat in the middle. I am wanting to remove the livewell/seat so I can increase the floor space and make this a better duck boat. I am planning on having the fill hole welded closed by a local shop and I am going to add removable flooring to the boat due to the supports. My question is would removing this cause a loss in strength in the hull and could it cause the hull begin to twist, flex, or break. I plan on using a 9.9 or 15 horse motor. I also plan on fishing out of this boat in the off season. I am sure this has been brought up before and from what I read from other threads it mainly talked about designated seats not livewell integrated seats. Thanks for any help.
Top

It really depends on the boat, and what it's rated for to begin with, and also with how you stiffened it up with the flooring. Some boats come with either two or three bunks, with the center livewell as an OPTION. That is the one you seem to be looking for, and that would be the obvious choice.

No matter what, you need to use discretion before starting to tear a boat apart, and preferably some communication with the manufacturer. They are the best ones to tell you if it will be okay in a particular model.

Here is a pic of a boat I had recently. It had a 40 on the back and ran great. If you look, you can see where the center bunk had been removed. They did a pretty nice job, and I would never have known, had I not noticed the bolts that filled the holes where the bunks were. I removed mine without any issues. My bench also had a stock livewell in it as well. I did just as you are thinking. Removed the bench and had the fill/drain hole for the livewell and rivet holes for the bench welded closed.

IMO, you need to look at how the rib supports run in your boat before deciding to take the bench out. Some boats skip a rib where the bench is making the bench a much more important piece for structure/support. Mine had the rib supports evenly spaced the length of the hull. If that wasn't the case with mine I would have either not removed the bench, or figured out a way to add support back to it after removing the bench (which a lot of guys on here have done). I also extended my bow deck back 17" to add room for hatches and a full length .125" aluminum floor. That probably helped a bit with structural support after I removed my bench.

Here is how mine turned out. It is a 1996 Tracker Sportsman 1648 with a 50/35 Johnson Jet. We run my boat HARD, especially in the fall/winter duck hunting. Zero issues with flexing from the bench removal. During duck season I routinely have 3 guys, 5 bags of decoys, guns and other hunting gear loaded on the boat. Still no issues from the bench removal. And the open floor plan makes it nice for hauling all of that and also moving around the boat. If done right removing a bench certainly does not make a jon boat junk. It makes a jon boat 100x better with the added floor space and ease at which you can freely move around the boat. 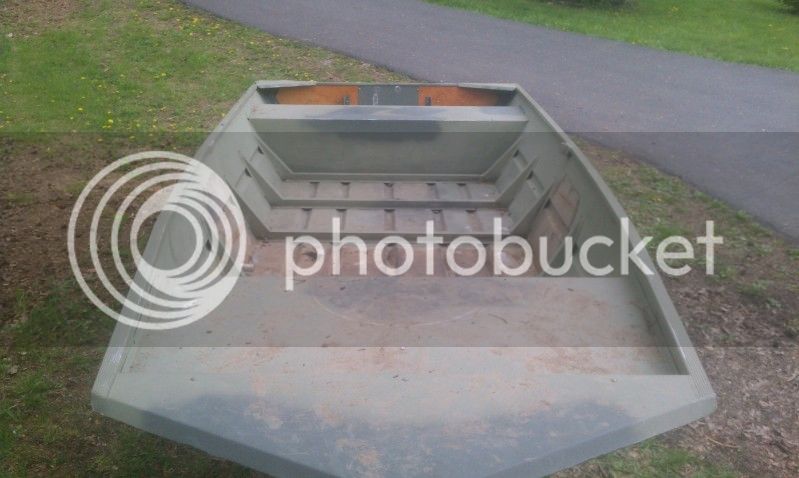 And after all of my work/mods.

This question comes up about every two weeks and the answers are usually the same. Those who believe it's ok to take out a seat do and those who think it's not don't. I don't think it's a good idea and eventually will show up with damage to the boat. I think the design and engineering community suffers from low esteem in the general public. Sometimes that's for good reason. I personally think automobile engineers ought to be chained to a car and be forced to make some basic reapirs under the hood. If they were I think some of their design decisions would be different in the future. We all know of examples where products might have been good or useful but for a bad design decision.

On the other hand, I'm going to assume that misguided or not, a designer or engineer knows more than I do about product development and manufacture. When considering whether or not to take out a seat I would urge you to take a look at the boat and how it was designed. Each manufacturer no doubt uses its best judgement as to how a boat should be built. I do think there are some design ideas that are common to most boats no matter who makes them. Please excuse my unscientific attempt below to point out a couple of important differences in how boats are made.

Both are made by Lowe. I couldn't find an exact counterpart of a riveted and welded boat and had to use ones as much the same size as I could. The boat on the left is a riveted L1648 and the one on the right is a RN1546 welded. I used screen captures so the resolution is poor but good enough to make the point. Note the difference in two areas. The ribs on the riveted boat are not as large nor do they go as high up the side of the boat as do the welded ones. Also, the gunnels on the riveted boat are not nearly as heavy duty as those of the welded boat. It is my belief that in both cases the reasons are that the welded boat was designed to be open and the riveted boat relies on the center seat for some of the structural integrity of the boat.

You can also see in the following two pics the differences between a boat designed to be open and one that relies on the center seat for its structure. I don't think the differences happen by accident and you can bet that the manufacturer isn't putting a dime's worth more material into the boat than is necessary .

I think most of us here aren't in a position to go out and get the thing we want but rather try to make the thing we have into what we want. Ideally we would envision the kind of boat we would like and go find one that fits the bill. I have a feeling it's generally the other way around. In the end I think it's important to consider what can reasonably be expected of the thing we've got and not try to make it into something it may not have been designed to be.

Short answer is no, I don't think you should take out the seat.
Top

I just took the middle out if my 1236 and I think it was the best thing I ever did to it more room for gear and I can now throw a bell on the pole and nap all stretched out my boat has ribs all throughout though no flexing and I nailed a few waves off a barge just to be sure got myself wet but no flexing as for the rivet holes I went to home depot got some stainless bolts nuts and washers as well as some clear paintable silicone and sealed them all painted the outside and inside and you can't even tell it had a middle seat unless you really look for the bolts on the sides.. At the end of the day its your boat use your judgment if there isn't many ribs I wouldn't have done it
Top
6 posts • Page 1 of 1